The musical "Hamilton: An American Musical" caught on unlike anything I remember. I know getting tickets in New York proved difficult, then getting tickets for the touring production seemed difficult, and expensive, as well. The music is catchy. Even those who don't necessarily care for rap, find elements that they like. It has something to catch attention of young, old, and middle aged folks as well. The highlight as an educator, of course, is that it can catch the attention of young people. In that, it can help spark a special interest in history, specifically, a very important time in United States' history. Lin-Manuel Miranda has written about seeing the multiple generations in the audience. He wrote something great that can be used an exceptional teaching tool.

How many of my fellow educators have heard students claim, "I hate history. It's so BORING!"? Perhaps it is less the subject than the manner in which we teach it. We can get students excited about history. Now more than ever, I find it important to hook students on history. We need them to learn the people and events that brought us to where we are today. As I shared with students throughout the 2016-17 school year, our nation's history begins not with the Declaration of Independence in 1776, but has roots back into ancient civilizations. I made connections for the sixth grade class, pointing out key elements that will connect to their learning in eighth grade U.S. History and referred back to sixth grade historical topics with my eighth graders. It builds and builds.

One way that we can hook our students and make history interesting is to draw on music, theater, and promote creativity.

Weaving songs into the birth of our nation

Throughout our study of the birth of our nation, I worked in songs or parts of songs from "Hamilton." Admittedly, even I know the musical better and some of our nation's history better than I did at the beginning of the school year (and I was a political science/history major). Looking back at how I used it last year as I look ahead to the 2017-18 school year, I already see ways to use it more and differently. We talked about the American Revolution. We looked at key figures in the birth of our nation. We discussed the location of our capital. We talked also about the establishment of our financial system. We could really dig into so much using music as a hook. That may be some of the obvious ways to use it. I will now look at a couple of ways to reach beyond history lessons. 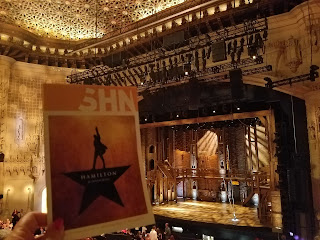 One student selected a piece from "Hamilton" and learned it for a speech meet our school holds. He worked and worked with it, then performed it wonderfully. (Admittedly, it can be difficult to not rap some of the lyrics when the intent is to deliver a speech, but it can be done. In fact, it can be done well.)


"They'll tell the story of tonight"

Toward the end of the year, we used "Hamilton" as part of our History Alive performance. Our school does an annual dinner and sixth, seventh, and eighth grade classes each do a performance. Historically, the eighth grade class did a Colonial dance (specifically, the Virginia Reel). I knew coming into the school year that I wanted to do something with the students using "Hamilton" and knowing that we had the History Alive dinner to look forward to, I saw a golden opportunity for awesomeness. I started talking about it early in the year to get the students thinking about it. I had ideas for choreography in my head early on, but waited to really work on it until closer to the event. This allowed the students to invest some of their own ideas into the development of their performance. The students started with the traditional Virginia Reel then transitioned into their version of a "Hamilton" number. Admittedly, I found myself feeling a little nervous about how it would all come together during rehearsals. Yet, I could see how it would come together and then, it did! It came together beautifully! These 15 eighth graders did an outstanding job. I was so proud of the performance they did and they definitely were telling the story of that night. I have already started looking ahead to next year's. Yes, it will be a little different than this year's.

Your school may not have a History Alive night, but using classical dances and songs from "Hamilton" can offer your students an opportunity to immerse themselves in a creative outlet that supports some of their learning. Have a class party and do the Virginia Reel. Assign students different songs from "Hamilton" and encourage them to choreograph their own performances. Assign students songs to present as speeches or even rap if they feel comfortable enough doing so. Or, nudge them slightly into that area where the magic happens, just outside of their comfort zone.

I assigned students to different sides of a debate then they had to debate the issue in class. They had to be familiar with both sides of the argument because I would not tell them which side they had to debate until the day of the debate in class. This is an area I am looking to make a change for next year. Using the Cabinet Battles for inspiration, I plan to assign students to a side of an argument then have rap battles as debates.

"Who tells your story?"

You can use this musical as a foundation for language arts assignments as well. Having used "Hamilton: An American Musical" throughout the year, I developed an end of year project for the eighth graders using it as the foundation. I called it the "Legacy Project." Students looked at their years at our school, specifically their final year to examine what their legacy at the school would be after their departure. They also wrote about their hero before getting into their story of how they would be heroes and who would tell their stories. This project included an essay and a WeVideo project. Students looked at their own heroes, but also turning to reflect on themselves and their own stories took some effort. They produced some good work and then shared their projects with the classmates. Next year, I will combine this year-end project with something I did a couple of years ago: "Through the eyes of an eighth grader." What does this mean exactly?

I will give the students a year-long assignment to take photos and videos throughout the year in order to capture the year through their own eyes. Then, that will all be built into their legacy projects at the end of the year. It will, of course, include small deadlines throughout the year. I greatly look forward to seeing how and what the students do with this. For now, I'll have wait for it.
(See what I did there?)

Rise up: Building a theme

I start building my classroom theme over the summer. For this year, I went with a great super hero theme. I know I could have done more with it which would have resulted in a better use of it by the students. Down the line, I will likely revisit the super hero classroom theme. Next year's theme will be rooted in....wait for it...
"Hamilton: An American Musical." 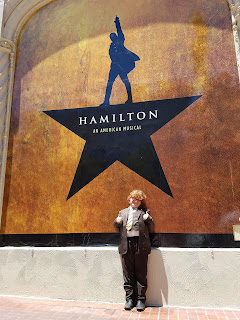 What I saw happening was nothing short of magic. I saw students evolve from "history is boring" to wanting to learn more. I saw students invest time into learning more simply because they wanted to learn more. They sought out more information on historical figures that have less prominence in the history textbooks. Seeing this with my students was exciting. I also saw it as a #TeacherMom as my (now) 10-year-old son can tell you more than I could have at his age about American Revolution battles, military leaders, the financial system development, Alexander Hamilton, Aaron Burr, and Thomas Jefferson. I knew Burr shot Hamilton in part because of a "Got Milk?" commercial and only learned about Lafayette later. My son can recount details and has now plans to read a biography on Hamilton as he gets ready to start fifth grade. "Hamilton" can be used across grade levels. Use it with older elementary students, use it with middle school students, use it with high school students. Explore it and find how it works best for you and for your students.

What did I miss? How have you incorporated "Hamilton" into your teaching, your lessons, your projects, your classroom?

Please note: "Hamilton: An American Musical" includes explicit language. There is a clean version of the soundtrack available if you prefer. Become familiar with the soundtrack before incorporating it into your teaching and use your judgment on how best to use it with your students.
Posted by Rebekah Remkiewicz at 5:55 PM